Fiio is, and has been, consistently updating and upgrading their audio devices; making them better than before, not only in terms of sound quality but also in form and function as well. Last year, the company released the successor of their X1 portable audio player, the all new Fiio X1 2nd Gen high resolution portable digital audio player (DAP). This new Fiio X1 2nd gen offers a number of changes and improvements from the first X1. The front portion and button layout somehow looks similar than the previous one, but the 2nd gen offers a slimmer, lighter body with curve edges. The new X1-II features Bluetooth connection, better DAC chip, and Fiio has replaced the mechanical wheel with a touch wheel. Despite the number of improvements the new X1-II brings, the price still remains affordable at $99.99, just like the old X1. You can check latest availability at Amazon.com here. I haven’t tried the old X1, so my review will mainly focus of the new Fiio X1 2nd Gen. Are you looking for a budget friendly portable lossless audio player? Kindly read on and check out my review below. 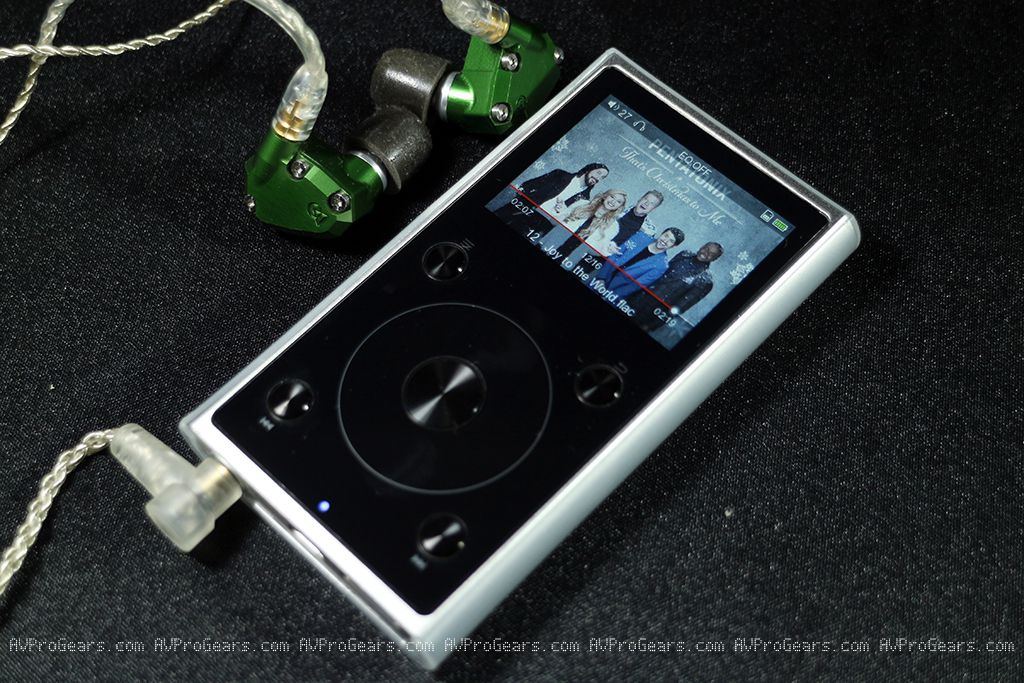 The Fiio X1-II’s packaging is simple and straight forward; nothing too fancy. Aside from the X1-II, you also get a quick start guide, a warranty card, a screen protector, two types of skins and a translucent casing. Nice Fiio! Out of the box, a screen protector is already attached, but it only covers the display portion and not the whole front portion. I strongly recommend that you remove the initial screen protector and install the full front film protector included in the box. This way you can avoid unnecessary scratches on the touch wheel portion of the X1-II. Fiio only included 1 full front film protector; I hope they included another as a backup. The skins can also be used to protect the front area of the player; however, I like the plain black look with smooth feeling instead. 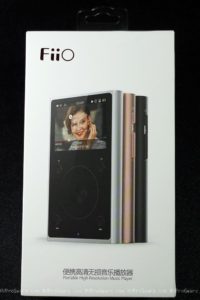 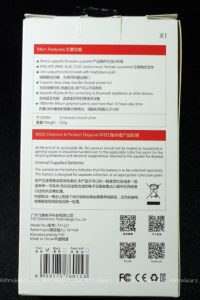 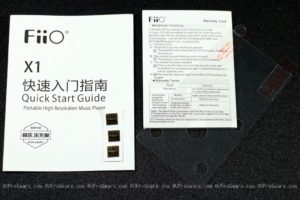 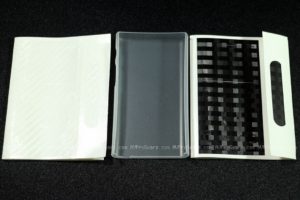 The Fiio X1 2nd gen is small and compact at 97mm x 55.5mm x 12mm and weighs only 102 grams. It’s definitely pocket-able and one hand operation is very easy and feels comfortable on hand. There are three different colors you can choose from; black, silver and rose gold. The Fiio X1-II is powered by a JZ4760B SoC that handles the general processing and operation of the portable player. At the heart of the audio section is a PCM5242 DAC chip from Texas Instruments, and is paired with an OPA2322 LPF and ISL28291 operational amplifier. Unlike the (super) entry level Fiio M3, the X1-II supports all major lossless formats including: FLAC, WAV, WMA, APE, ALAC and supports up to 192kHz/32bit audio format. The portable player is powered by an 1800 mAh battery which is rated to last up to 12 hours of playback. Of course, in real world use battery life could be shorter depending on the setup.

In the old X1, the DAC chip that they used is the PCM5142 which is a tad limited when it comes to frequency response and other aspects. Although the difference between the PCM5142 in the old X1 and the PCM5242 in the X1-II is not that significant; the latter still offers higher signal to noise ratio, and broader dynamic range and frequency response. Like I said, I haven’t tested the old X1 before, so I don’t have any idea how big is their difference in terms of sound quality (if there is any). In theory, there should be a difference, specially with the better DAC chip used. 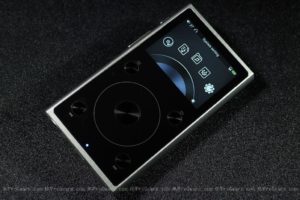 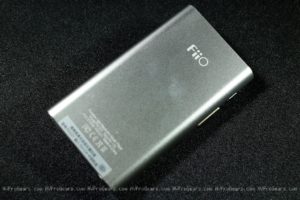 There’s no internal storage memory on the Fiio X1 2nd gen, but there is a micro SD card slot that supports up to 256GB of microSD. On top of that Fiio has also added a Bluetooth 4.0 feature so that you can use the X1-II as a source for your wireless headsets, earphones or even wireless speakers. Unfortunately, aptX is not present at this time. I’m also unsure if Fiio will release an update firmware that will enable aptX CODEC. I guess it has something to do with its Linux operating system, which could be a limiting factor.

Going back to its battery life, the Fiio X1-II has this feature called deep-sleep standby design where by you don’t need to fully turn it off to save battery life. When you press the power button for a few seconds, the player shuts down. But if you press the power button once, the display turns off and all buttons and touch wheel is disabled. If there’s a track playing, pressing the power button servers as the lock or lock screen function. However, if the player is inactive or not playing anything, it goes into deep-sleep. Pressing the power button again activates the player, not need to go through all the booting process. This offers instant music playback and according to the company, the player can go up to 15 days in standby. 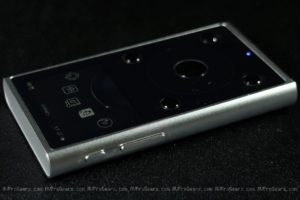 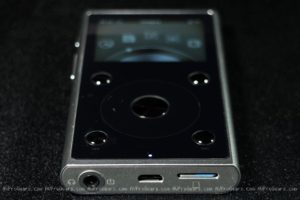 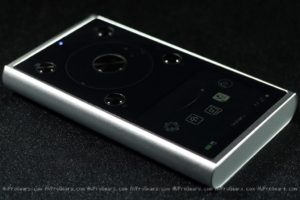 There are eight physical buttons on the Fiio X1 2nd gen and the touch wheel. On the left side are the power button and volume + and – buttons. On the main interface are the options button “≡”, return or back button, the previous and next buttons on the lower portion and the select button on the middle of the touch wheel. At the bottom of the Fiio X1-II are the 3.5mm headphone out, which also serves as a line out, a micro USB 2.0 port (for charging and data transfer), and a microSD card slot that supports up to 256GB of microSD card. There’s also a blue/red LED indicator located just below the touch wheel, between the previous and next buttons.

I have updated this review and went with the Fiio X1 2nd gen’s firmware V1.5.3. Aside from several bugs fixed, Fiio also added a scroll wheel press function in this version. It’s basically a stable and refined version compared to the previous release. It’s good to know Fiio is constantly updating their products firmware. This won’t become a dead product like some DAPs released in the market, where the creators don’t seem to be interested in updating their products firmware anymore. The scroll wheel press function is a nice addition but when enabling this feature, I noticed that the scroll wheel becomes more sensitive and it’s a little bit annoying and hard to control. I prefer to turn this function off and use the circular motion to navigate the interface instead. 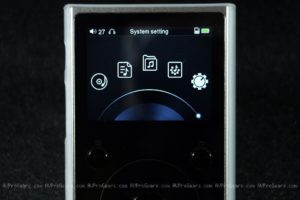 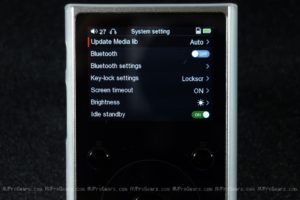 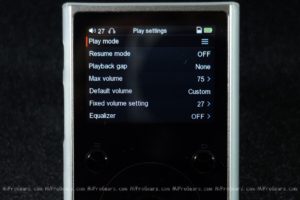 The Fiio X1 2nd gen’s user interface is pretty much easy to understand and get used to. There are five main options to choose from, the Now Playing screen, Category, Browse Files, Play Settings and System Settings. There’s nothing complicated here, in fact it just took me a few minutes to get used to its user interface and navigation. On the Play Settings, you can adjust or customize the default volume level, tinker with the equalizer, and other options related to audio playback. In the System Settings this is where you can customize or change settings regarding the player itself. From this menu you can turn on/off Bluetooth, pair with other wireless devices, adjust brightness, change the X1-II’s theme, set sleep timer, scroll wheel function, format an SD card, factory restore and more. There’s even a quick guide on the About X1; the quick guide gives you information on the buttons and ports, basic operation, firmware update and notes on usage. 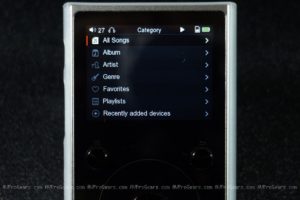 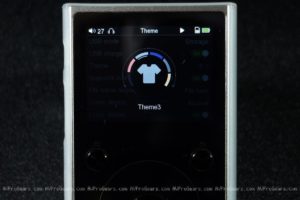 I tried pairing the X1-II with some of my Bluetooth speakers and headphone; it doesn’t detect devices as fast as compared to modern day smartphones. When I was using the previous firmware, the X1-II can’t even detect my MW60 headphone. But with the FW V1.5.3, it was finally able to detect the MW60 and pair with it. In terms of sound quality, I would still prefer wired connection over Bluetooth, specially due to lack of aptX. Don’t get me wrong, sound quality over Bluetooth isn’t that bad; however sound quality via wired connection is still better to my ears.

In terms of overall performance, the Fiio X1 2nd gen is okay and manageable. Like I said, its user friendly and easy to get used to. However, it is not very fast and snappy. I would experience a slight pause or lag (probably a second or so) when switching from one track to another, or when playing another track from another folder. The touch scroll wheel is good and manageable, but I could feel a tiny bit of lag. Turning on the scroll wheel press function would make it more (unwantedly) sensitive than before. I hope feature firmware updates can fix some of these issues to make the user interface smoother and lag-free. 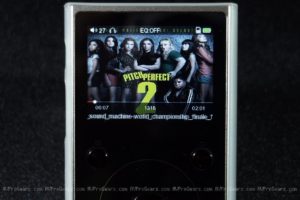 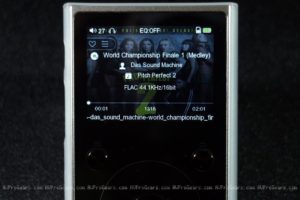 How about sound quality? I’m sure this is the primary concern of the many. I’m happy to say that the Fiio X1 2nd gen has a clear and clean audio quality. It’s definitely better than the (super) entry level M3, and some say that it has a slightly better sound quality compared to its predecessor. The X1-II has been my daily driver since it arrived last month, so that my ears will get used to its sound characteristics. And my ears are telling me that is has a neutral tonality, probably leaning towards the brighter side by just a bit. When I was comparing the Fiio X1-II to some of my DAPs (Cayin i5 and L5 Pro), the X1-II feels and sound lacking on the warmness or probably the “meat” from the lower section. Bass do go deep but I don’t sense or hear that smooth round and warm sound I usually hear from my other sources. The mid section is clear and clean, with a slight forward presentation. Upper mids or the treble section seems to lack some refinement, but treble doesn’t sound rolled off at all.

I didn’t have any problems when pairing the Fiio X1-II with any of my IEMs. It was able to drive my Andromeda with ease, volume level around 30, and almost all of my other IEMs. I also tried using my Audeze EL-8 and HiFiMan HE-400i with the X1-II and it was able to drive both headphones. Volume level is higher though, around 70 to 75 for the EL-8 and around 80 to 85 with the HE-400i. One thing I noticed with full sized cans though when paired with the X1-II, they don’t sound as full or meaty compared to when paired with other (higher-end) sources. No, I don’t mean the volume, no problem with the volume as it can go up to 100 steps. It doesn’t have any problems driving highly efficient to mid-efficient headphones. But the bass and mid section doesn’t sound full, round and satisfying. I guess the Fiio X1-II may not be the best DAP for full sized cans, but it’s definitely good for IEMs or earphones.

Fiio is asking $99 for the Fiio X1 2nd Gen, and I think the price is just right and you do get what you paid for. However, I’m not sure if upgrading from the old X1 to the X1-II is a good idea, like I said I haven’t tried the old one. But if you plan to upgrade, better target the next higher-end DAP. Fiio has X3, X5 and X7 for that matter. I am not really a fan of “side-grading”, and I’d rather suggest that you go the next step higher if possible. But for those who are just starting out on their audiophile journey and fancy a portable setup, or you just need a secondary or tertiary DAP for on the go, I think the Fiio X1 2nd gen is a good place to start specially if you are an IEM/CIEM user. Sound quality is definitely great for its price; and sound quality is also better compared to your typical (entry to mid) smartphones.

What I like About the Fiio X1 2nd Gen:

The Fiio X1 2nd gen portable audio player comes with a manufacturer’s suggested retail price of $99.99. You can check the latest pricing and availability at Amazon.com here.